Giulio Lazzotti was born in Pietrasanta, near Lucca in Tuscany in 1943. He graduated in Architecture at the University of Florence where he also taught from 1973 to 1975. He received the Oscar for the best furnishing project at the “Moving of Paris” in 1979 and the first prize in 1982; from 1972 to 1982 he was Art Director at C.A.M.P ( Consorzio Artigiani del marmo composto). In 1983 his works were exposed at MoMA in New York in 1983. He was member of several committees such as the MENHIR award in Madrid and the IMHOTHEP in Valencia. From 1991 he formed a partnership with Kan Yasuda, planning his exhibitions in Milan, at the Yorkshire Sculpture Park, in Pietrasanta and then dealing with his monographic books as creative director. He taught at the Accademia delle Belle Arti in Carrara, within the “Marble Design” course from 1991 till 1993. He deals with architecture, interior design, consultancy for companies, urban and restoration design. He is active in Italy, USA, South America and Japan; he lives and works in Pietrasanta. 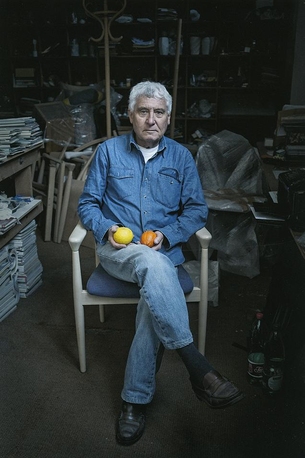